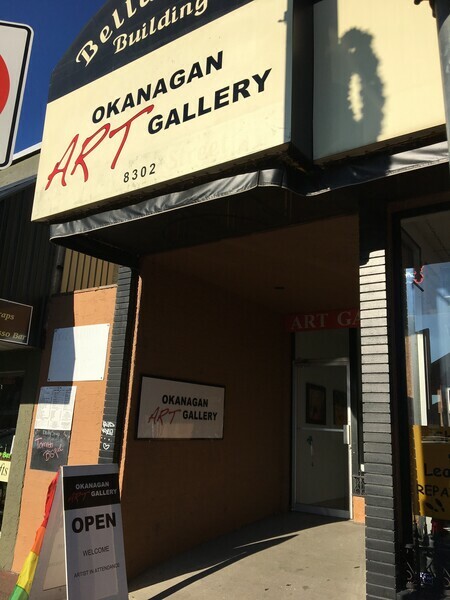 The Okanagan Art Gallery is a small and earnest business located in Osoyoos, B.C. and comprised of over two dozen south Okanagan artists.  The gallery began a number of years ago as the result of a series of connected events.  In March of 2011, Steve Staresina, an Oliver entrepreneur set about finding a small group of like-minded artists to create what would become the Oliver Art Gallery.  The Main Street location he secured, while visible and with lots of glass, had a history of short-tenured occupation and needed a lot of work, including a new ceramic tile floor, to be serviceable.  The first members of the gallery stepped forward to trim, tile, scrub, saw, sweep and paint and within a month the upstart gallery was open for business.

Over the next four years, new members would join the group and others would leave but a nucleus of believers would stay and grow the business.  Around the end of year two, they became a registered Artists’ Co-operative under British Columbia Statutes joining a handful of other B.C. galleries in Nelson, Duncan and Granville Island organized in the same way.  By year four however, it became obvious the business needed to expand to find new markets and more space.  An extensive search in the Oliver area for affordable space to expand yielded no prospects.  It had gradually become obvious to the members that the major market for art in the valley is the tourism sector and despite the predominance of wineries in the Oliver area which attract visitors, the major source of tourist accommodation was in Osoyoos and that was likely a better location for a commercial gallery.  With some reluctance the group decided that if suitable premises could be found, the co-op would be better located there.

It took less than a week of sorting through real estate listings and a brief period of tire kicking before a promising commercial premise on Osoyoos’ Main Street was found.  The former offices of a local lawyer comprising over 2000 square feet in six separate rooms, the place actually looked like a gallery.  Each room was flooded with light from an overhead skylight and a large back room showed promise of being a suitable teaching space.  A lease was negotiated, renovations performed and hanging day arrived and the crew – our members – showed up in large numbers to help fill the walls.  The advertising signs were affixed to the outside of the building and the ‘OPEN’ sign turned on and we are in business again.

At the time of writing the Co-operative is fully subscribed, visits and sales are up markedly and the gallery membership is at capacity.  Members draw by lot to display additional art on a feature wall each month.  We are also considering inviting guest artists to display works in a designated portion of the entrance hallway.  As Osoyoos has become the destination of choice for large numbers of visitors fleeing the frigid winters of central Canada, the gallery is beginning to develop programs including ‘paint-ins’, demos and classes designed to attract and entertain visitors.  Watch this space for more exciting developments.